What’s New in The Drupal 8 Experience

If you follow Drupal at all you’ve probably heard about the release of Drupal 8 and that it’s a Really Big Deal™. But if terms like OOP, REST and WAI-ARIA make your head spin, you may be wondering whether it’s really a big deal for you.

In Part 1 of this series of articles we’ll take a look at some of the changes that Drupal 8 will bring for both website visitors and maintainers. In Part 2 we’ll explore what the release of Drupal 8  means for you – whether you already have a Drupal site built on a previous version, or are planning to build a new website and are wondering if Drupal 8 is the right choice.

Responsive, Right of the Box

When Drupal 7 was released at the beginning of 2011 responsive web development was still in its infancy. Mobile browsing was already making a dent, but the most common way of handling small screens was to create a separate website designed specifically for them. This had the advantage of letting designers tailor layouts and interfaces specifically for mobile devices, but this also meant that website owners now had to support and maintain two separate websites. Responsiveness – the idea that a website could present itself differently depending on the shape and size of the browser – was an exciting new concept, but not yet an established practice.

In the intervening years the ubiquity of mobile devices and proliferation of screen sizes has transitioned responsiveness from “nice to have” to “must have”. And Google’s announcement this past April that mobile friendliness would improve ranking in mobile searches gives it more urgency than ever.

Drupal 8 adds a new level of sophistication to responsive theming. Not only are all of the Drupal base themes now responsive, images can also be set up for different screen sizes directly from the display properties:

This makes it possible to automatically deliver appropriately sized images to different devices, which helps to speed page loads on smaller screens.

And speaking of speed…

Drupal’s always been pretty fast when it came to serving relatively static pages for anonymous users. Smaller sites could rely on Drupal’s internal caching system alone, while larger ones might need to leverage the additional power of external tools like Varnish or a CDN. The one place performance could be a problem is with highly dynamic or interactive pages – when pages or parts of pages changed too quickly caching would break down and there wasn’t much anyone could do to recover the desired speed – until now.

Dries Buytaert, the creator of Drupal, has an excellent (if rather technical) explanation of enhanced caching and other performance optimizations in Drupal 8. The bottom line is that with Drupal 8 you can make even the most dynamic pages fly.

Back End – The User Experience

Responsiveness isn’t only for visitors. Website maintainers and content creators often use mobile devices, and Drupal 8 has made it easy to update your website on the go with mobile-friendly edit and configuration screens: 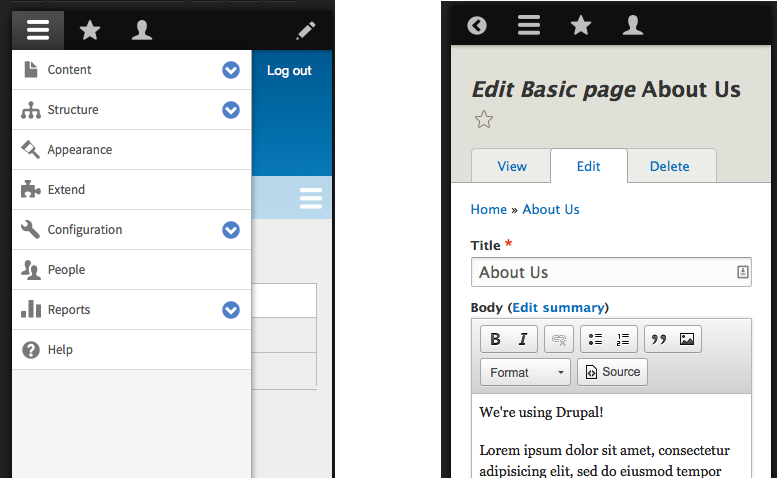 One of the more annoying elements of Drupal 7 for backend users was the Preview function. People often want to see what the changes they’ve made will look like before they publish, and naturally expected preview to provide that. But because the preview screen used the back end theme, it could show the elements that would appear – cropped images, text, etc. – but without the fonts and positioning that the live page used.

Drupal 8 has taken care of that with a completely revamped preview screen that can show you the page as it will appear when it’s published:

And if the content appears in a different context using a different layout, e.g., Teaser Mode, you can preview that too: 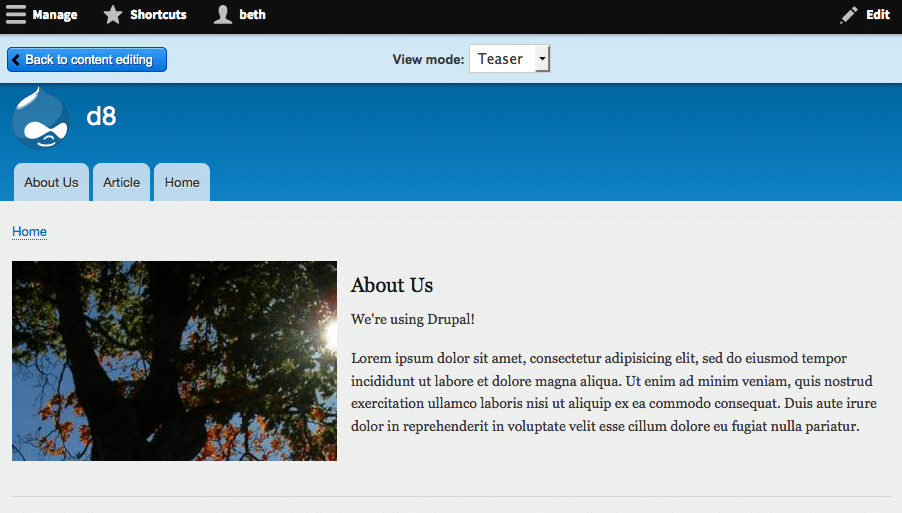 But what if you’re just making a small edits – updating a page title or correcting a typo in an article? Wouldn’t it be nice to be able to make the change directly on the page without loading an edit or preview screen at all? Drupal 8’s new in-place editing feature lets you do just that.

Mouse over the content you want to edit. You’ll see a contextual edit icon (pencil) in the upper right corner of the content area. Click to show the contextual menu:

Choose “Quick edit” from the menu then just click on the field you want to edit (title, image, text area, etc.) and you’re ready to go:

Drupal 8 involved a major rewrite of the Drupal codebase, integrating modern coding standards and API’s to help developers build stronger, more stable CMS applications. But you don’t have to be a techie to appreciate the new Drupal. In this article, we’ve barely scratched the surface in exploring some of the features and functionality that improve the look and feel of the website for visitors and maintainers. In Part 2 of this series we’ll take a look at some of the issues you need to consider when deciding whether Drupal 8 is right for you.

If you want to learn more about Drupal 8 or how we can help you, Get in Touch!

We help social impact organizations move from content chaos to effectively communicating their ideas with messages that are purposeful and productive.

We help strengthen organizations, teams, and individuals through customized workshops and training opportunities focused on brand strategy and communications.

We translate ideas and strategy into tangible experiences that create meaningful connections to your mission and motivate people to action.